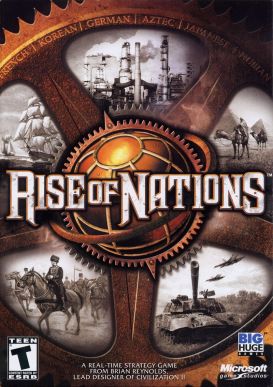 Since my childhood I have been playing a lot of RTS games. From Rise & Fall Civilizations At War to Age Of Empires, I have played a lot of them. And I have to admit, I’m not great at them. Whenever I would play online against other players, I get easily defeated. Yet, I enjoyed my time with these games quite a lot. I love to play skirmishes or various matches against the computer. Now, one of the favorite RTS games is Rise of Nations. And that’s the game we are going to take a look at today. A game where you take your civilization from give or take the stone age to the modern times of today. So, let’s not wait longer and let’s dive right into my first impressions of this game. The reason the first impression is simply because I never finished the campaigns, so yeah. I haven’t seen all the content of the game. And as usual, feel free to leave a comment with your opinion on the game and/or the content of this article in the comment section down below. 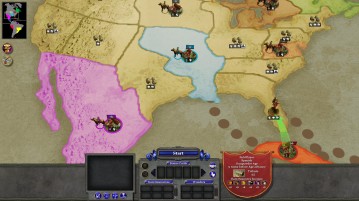 Rise of Nations has been developed by Big Game Studios, the studio that also worked on the second expansion of Age of Empires III. While this game has a “Conquer the world” campaign mode where you play as for example Napoleon conquering Europe, I haven’t played a lot of that mode. And that has a simple explanation, I already talked about in the introduction of this article. Now, for this article I have played parts of the first campaign of Alexander The Great.

Now, for this article I have played the extended edition of the game that is on Steam at the moment. The core gameplay of this game is extremely similar to games like Age of Mythology and Age Of Empires. If you have played a RTS game in the past, you will feel right at home in this game.

Some mechanics do work differently in this game. First of all, the way to claim land. When you start the game, a certain part of the map is colored in your color. You can expand this area by building more cities or defensive buildings. You are unable to build any other buildings outside of that area. It’s quite important that you plan out your city structure well, since it’s a factor in how much wealth you will earn from your trade route or the ability to build even better wood cutting or mining camps.

To increase the population limit or the efficiency of certain buildings, you will need to upgrade at the library. There are 4 trees you can update. The military level which allows you to create even better military units, the science level to have even better buffs to your economic output and military, the economics level to have your resource gathering be even more efficient and stockpile better and the civic level which allows you to build even more units and cities. On top of that, you have to worry about advancing through the ages. You go from the early stone age to the middle ages to finish in the modern ages.

Another mechanic in this game are the merchants. Spread over the whole map are certain bonus items. Sometimes they can be presents like the relics you can find in Age of Empires III but without the guardians. And sometimes they can be rare resources that can give certain buffs. On this Wiki page, you have a list of all the different buffs you can get.

As you can see, there are many layers on top of the gameplay. The game is very complex and expansive. And I haven’t talked about how you can conquer and take over cities, set the unit production to loop, the fact you can take out your enemies in many different ways, the ability to rename your cities, the unique wonders and their bonuses… The features that set this game apart from other RTS games are just amazing and make for a very unique experience. 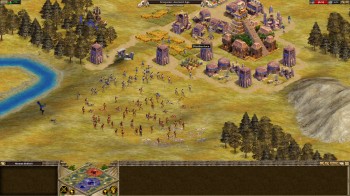 This game can be very challenging. Depending on the difficulty of the AI, this game can be quite easy or quite difficult. While I’m able to beat the computer on Normal, I always have trouble when the computer is on hard mode. Yet, the issue I have with this game is that the normal mode provides just a bit too little challenge for me and the hard mode provides a bit too much challenge for me. Whoops.

Up close, the visuals can look a bit dated. But, that’s completely normal. Since near the end of the game, there are so many units on the screen, I’m glad that they aren’t too detailed. The ending of a game can be so extremely hectic, I can barely keep track of what’s going on. I remember a multiplayer session with my best friend. In the end of that session we neglected our economy and idle villagers because the warfare required most of our attention. At the end of a match, you are able to make 4 big upgrades. One of them is instant creation of units. With this upgrade, the warfare gets so crazy, you have to focus on it.

Some elements of the UI in this game can be expanded and collapsed. For example, when you expand the resource menu, you have quick access to the market where you can trade resources. You don’t need to click on a market to do that. You can also see if there are open spots for mining, farming, wood cutting… And when these get in your way, one simple button click and they are hidden.

Not only the visual presentation and sound design changes through the ages, the animation does as well. When you reach the industrial ages, the miners you jackhammers instead of pickaxes to mine.

The sound design is amazing, it really captures the enjoyable chaos that happens on screen perfectly well. On top of that, the sound effects for male and female units are different. Yes, when a female unit dies, you hear a woman scream. And guess what, you hear a male scream when a male unit dies. This attention to detail is just amazing.

Couple this sound design and amazing visual design with an amazing orchestral soundtrack and you have an amazing visual presentation. In the original version, I had issues with the soundtrack. It never played during gameplay. While playing the Extended Edition, I haven’t encountered that issue once. 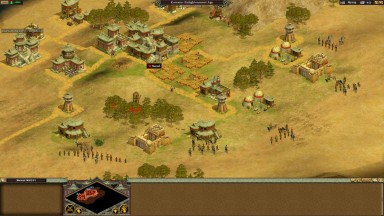 Now, is this game perfect? No, there are some things I would change in this game. One complaint I have is that there aren’t too many differences between the nations you can choose to play as.

Due to the various amounts of game mechanics, this game can be extremely overwhelming. If you aren’t into RTS games, just don’t play this game as your first RTS game. This game isn’t easy to get into because the various amount of layers upon layers of complexity in this game.

Due to the length of some rounds, I honestly got a bit bored at the end. This game is a lot of fun to play but near the end, I found that the game became a bit too repetitive to my liking.

Also, compared the to original game and the extended edition, there hasn’t been a lot of additions. Thankfully, the community picks up the slack from the developers in the Steam Workshop.

Some achievements are rather grindy in nature. I have close to 60 hours of playtime in this game and I’m not even halfway to the achievement of killing 50K units. Yes, I have killed 8K units during my 60 hour playthrough.

And to be honest, that are all the negatives I can talk about. Maybe I discover a few more negatives when I’m trying out the campaign mode again soon, but I highly doubt that. This game is quite a lot of fun if you are into RTS games. Once this game has a hook on you, it barely lets go. This game is one of my favorite RTS games and I’m so glad that it’s available on Steam. And after writing this review (well, first impression) I can’t wait to boot the game back up again and start up a new round.

With that, I have said everything I wanted to say about this game. I want to thank you so much for reading and I hope you enjoyed reading this article as much as I enjoyed writing it. I hope to be able to welcome you in another article but until then, have a great rest of your day and take care!