This game is a game that I’m going to finish for a very special reason. A forum member wants to review it with me. I better make hurry and finish this game. But as a good practice, I am going to give my first impressions of what I think of the game till now. I have finished two worlds of the six worlds and I’ll be playing this game till I’m able to finish it. Anyways, this game is the latest entry in the Paper Mario series and it’s extremely different then your usual RPG. You have to find your moves yourself. So, is this a good concept or does this make for a game that will totally fail to impress you? Let’s find out in this article, is it actually worthy to be finished by NekoJonez or I’m going to stop halfway and give it a bad rating?

I want to be direct for a change. That game has bugs. Yes, but very rarely. I had once that all my stickers where gone and I had suddenly 9 pages. Lucky for me, when rebooting my save file, I got all my stickers back.

In this game, there are no random battles. You actually see the enemies on the screen. This is extremely handy when you want to avoid them and makes it helpful for speedrunning the game.

You don’t have to worry about stats either. Do you have the stickers to first do area 3? Go ahead, the monsters won’t be that much stronger. You will only need to find stickers to defeat them.

Sadly enough, this game can be easy sometimes if you ask for advice. Often you get then told where you need to go. But this leaves a great possibility open. If you want to search things out by yourselves, you can easily do that by not asking advice.

Labeling this game as a RPG isn’t actually correct. Since the only thing you can upgrade is your health. Your attacks will be all scattered in the overworld. You just need to peel them off the walls and fences. One thing that made me a bit sad is that you can’t heal up outside of battle unless you have those boxes. But this makes for a great addition to the difficulty. 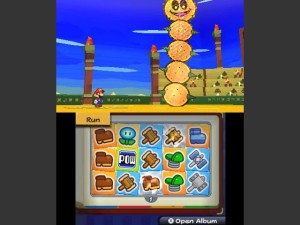 Thank you Nintendo for making this story bit more unique then your usual, Bowser is up to no good scheme. While the story is about Bowser doing bad things, the kidnapping of the princess is actually not entirely his doing. This leaves so much room for creativity and I’m curious how they are going to use it.

This game saves automatically, so that’s something you don’t need to worry about. When you finish or exit a level, the game will save. And the levels are build up like a typical Mario game. You have themed zones, like mountains,  forest and a desert. Unlike a good Mario game, there are only 6 worlds. But it doesn’t make the game shorter, I have been quite busy in each world and I’m not complaining about the length now.

The game isn’t that easy. You will need to search everywhere in order to continue. Thinking outside and inside of the box is often required to solve some puzzles. You need to mostly have an eye for hidden passages which I often lack.

The graphics are truly well done. The game feels like paper and everything acts like paper. It surely gives me nostalgic feelings towards the old-school 3D games. Where the trees and all looked like paperboard cutouts.

But, what about the flaws? 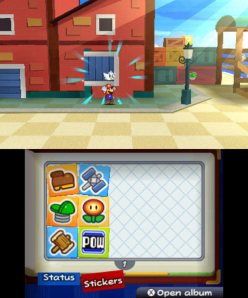 I’m glad you asked. One thing that isn’t flawed is the music. It’s upbeat and melodic. With I like extremely much is that when you walk around in the overworld, the music changes in style in which area you are. Very nice touch.

But now, let’s talk about the things I don’t like. First of all, to give better attacks, you need to have a great timing. Which I often don’t really have or forget about. This makes sometimes enemies a bit more troublesome to fight.

Also when 2 enemies are near, and you jump on one, you often see the 2nd enemy also in the battle screen. But I had various occasions where that 2nd enemy that was following you still lived after winning the battle.

I realize this is to make the game a bit more difficult but blocking only halves the damage. It’s nearly impossible to avoid an attack.

Also, let’s get nitpicky. In the shop, you can only buy one sticker at a time. When I want to buy health stickers, I need to press the “A” button over and over. Which couldn’t they simply add in an option where you could select how much stickers you want?

The controls are a minor disappointment. I am and I have been a gamer that uses the directional arrows more often then a joystick. And this game, you can’t control with the arrows. That is a missed opportunity in my opinion. Since those buttons aren’t used. They could have made an option to use one of either.

Also, you can’t choose the arrangement of your stickers yourself. You have a handy button to let the game sort all your stickers but if you want to have a health sticker on the 2 page and on the 3rd page, though luck. That ain’t gonna happen.

19/06 Edit: Well, you can actually move the stickers around like you would move an icon on a smartphone. Yet, I feel it’s not expanded enough.

In conclusion, this game is a great game. But it has a few flaws. Some might be nitpicky but they make the game feel unpolished. It misses a bit of the “Nintendo Final Touch” polish so to say. But now I’m going back to work, I mean game, to finish this game.