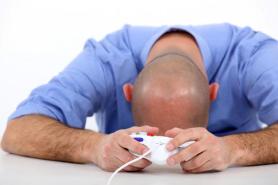 We all have these moments in games we don’t like to play. Even when you are playing a great game, sometimes it can throw some very irritating or just badly designed areas. In this article, I’m going to talk about a few things that I wish I could skip or use a glitch to skip the section. But sadly, most of the times, I have to do it in order to progress in the game. Do you dislike the same things or do you like them? Feel free to let me know in the comments. You could also comment on the content of the article and/or things that irritate you and I haven’t mentioned. Oh, a while ago, I wrote a rant about 10 things that frustrated me, and don’t worry! In this article, I won’t repeat what I said in there.

I love adventure games. I love exploring caves and finding treasures. That’s why the Tomb Raider and Zelda series are one of my most favorites series ever made.

But there is something that I wish that I could skip. And that are the jumps you need to make when swinging on a rope. In the Legend Of Zelda the Wind Waker, there is a section to get an important item you have to swing on some ropes. To make matters worse, it’s timed and if you fail, you need to restart the whole thing.

I seriously hate this section of the game. Since the ship also moves, so the ropes move too. This way I can’t always correctly judge the distance between the ropes. I was able to finish this section when I was lending this game from a friend after an hour of trying. Now, I’m at the same section in the Wind Waker HD and I’m currently trying for around a half hour.

But hey, the rope jumps in the old Tomb Raider games weren’t much better. I have heard some veteran Tomb Raider players complain about the pixel perfect rope swinging in the first five games. I have to agree from my own experience. Since the next rope isn’t always visible when you are swinging.

In the past, it was even worse. I wasn’t that good in jumping puzzles of any sort. But after I played games like Mirror’s Edge, I have improved quite a bit. But the rope swings still stay a problem. The weird thing is that when I’m playing a game like Indiana Jones and use the whip, I can swing just fine. In Tomb Raider Legend with the grappling hook, no problem. But dangle ropes in front of me and say I need to play Tarzan and swing from rope A to B… And I’ll be busy with that section for a while. 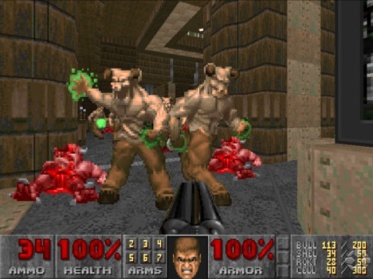 Ah, today I was stuck in a level in DooM II because I didn’t notice one jump of fate you had to do in order to progress in the level. It was in the Citadel level. But here is a fun story. I’m talking about the part where you need to get on a high spot in the citadel and jump over the border into the river, so you can go to the other side to a room that opens to a room with 5 teleporters. If you have played DooM II, I think you will know which part I’m talking about.

Well, I was able to glitch myself there. By running at the corner of the barrier and suddenly, I popped passed it and I was able to progress.

Delver is another game that does the same thing. In some cave levels, there is a certain level geometry where you need to do a jump in order to progress. Like DooM II, Delver doesn’t have a jump button, so you don’t think it’s possible in the first place.

But what annoys me the most are jumps of faith above a death trap. I don’t think I need to explain myself here.

I’m not finished talking about the death traps. In Delver, there are traps like a transporter and a poison trap. But you can’t see the difference between both. While this suits the game better, since it’s a roguelike dungeon crawler. But a small hint on the tile would be nice.

But in some games, like in Star Tropics on the NES, there are secrets that lead to instant death. I made me shut off the game twice since I lost a lot of progress. Since the game sets you back at the start of the area you were at.

Going back to DooM II, a nice example was at the same level I was talking about earlier. There is a barrier that goes down and you need to run passed it. But, when you mistime your run, you get stuck underneath it. Without a way to escape. Man, every time it killed me, I got more and more annoyed.

Well, I think I’m going to wrap up this article right here. I was planning to talk about more annoying things in games, but I decided to keep those for a sequel to this article. It felt better to talk a bit more in-depth on why I get annoyed at those things.

Also, I have already talked about my biggest frustrations with the gaming market in the past. I have linked to that article at the start of this article.

Anyways, thank you for reading this article and I hope you like it as much as I liked writing this article. I’m looking forward to the comments on this article since I find it very interesting to talk about what is frustrating in games so we can suggest improvements for future games.

I hope to welcome you in another article on my blog, but until then… Have a great rest of your day! Game on and take care.