For those who remember Little Kite, I have talked about last year in December, I have some interesting news for you. The developer Anate Studio contacted me to announce the sequel called Repentant! Or is it a sequel? Let’s look at what’s released so far. As usual, feel free to give your opinion on the content of this article and/or the game in the comment section down below.

Information for the developer

It’s a dramatic point & click adventure about a man who is trying to atone for the sins of the past.

The story in this game shows the events that took place seven years after the events of the game Little Kite. The main character, Oliver, survived but suffers from pangs of conscience because of his behavior in the past. This led to the fact that his family left him and because he is obliged to continue criminal activities. But soon, he gets a chance to atone for his sins by helping another person.

Everything will occur in a small store with three characters. Oliver is a man who has a dark past. A shopkeeper decides to rob his own store, together with the help of a girl. This decision was made thanks to severe life circumstances.

Despite the characters and references to the previous game, this game can be played and enjoyed even if you haven’t played Little Kite.

The game will be available for Windows and Mac. 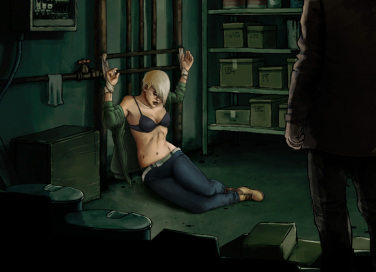 I really enjoyed playing Little Kite. Because some parts of the story stuck with me personally. So, when a mail arrived from the developer in my inbox talking about a new game and a possible sequel to that game, you can say that a hype train left the station for me.

Looking at the screenshots and gameplay demo, a few things can be concluded. In terms of art-style, atmosphere and gameplay, nothing much is going to be changed. And that’s a good thing! Visually, this game looks amazing and I’m a big fan of the style. It reminds me of games like Hotel Dusk and older Broken Sword games.

While you might notice some typo’s here and there in the preview video, I’m not too worried about that. Since the developer said that the video only has a draft version of the text and the proofreading will happen later in development.

In terms of the story, I’m quite interested. I’m honestly expecting a story where betrayal and a mystery will be the central focus of the game. While the game will take place in one place, I’m curious to see how this place is used. There is a lot that can be done with only a few rooms, that fact is proven by all the “escape the room” games that exist.

Watching the preview video, I am even more hyped to play this game. I really like details like the names of the places showing up when you go from screen to screen. This makes it a lot easier to navigate in a point-and-click game.

The only thing I didn’t really like in the preview video was one minor thing. The looping of the sound-effects inside the store with not smooth enough. If you pay attention, you can hear when the sound effect starts and when it stops. That’s all.

Real talk now for a moment, the developer is planning to possibly release this game upcoming spring. If you can create an adventure game in a year with at this quality, I have a lot of respect for the developers. Creating games isn’t easy and I really hope this game succeeded. I can’t wait to see more from this game and I can’t wait either to play it. So, if you are as interested as I’m in this game, I urge you to follow the developer on Twitter and Facebook for more updates.

So, that’s everything I wanted to say about this game for now. Thank you so much for reading and I hope you enjoyed reading this article as much as I enjoyed writing it. I hope to be able to welcome you in another article but until then, take care and have a great rest of your day!