Since I finished Corpse Party, I started a new game. I got introduced the Monkey Island series by the PS2 game, Escape from Monkey Island. When I saw this game I had to play it. I started to play and really got into it. I finished the first chapter and then got distracted by guess, yeah, Corpse Party. This game is created by TellTale Games. The original creator of Monkey Island said it was probably his last game, since he feels he got to old to create games. Also, the original cast returns for the voice acting in this game. This game was released in episodes and my current progress is that I’m at the final part of the 2nd chapter. After that chapter, I’ll of course write a full review of this game. But for now, let’s dive into this game, and the first impressions it made on me.

This game is a nicely crafted adventure game. Yet, it annoys me that this game is in several episodes. When you save in episode 1, you can’t start that save in episode 2. It makes a lot of sense but here is the thing. When you install the game now, all the episodes are unlocked to actually you can start playing at the start of the last chapter and beat the game that way.

This game’s story really made me think. What if the bad guy actually becomes the good guy, well sort of. Up until now, I found the story rather enjoyable. It’s funny like you expect from a Monkey Island game. It made me laugh several times. Not to sound like a soulless person but I barely start laughing with games. I makes me smile at most. Since it mostly uses American humor and I enjoy European humor more. But this game actually has some funny parts for each culture.

The way the story is told is classical adventure game. Lucas Arts (rest in peace guys) has perfected this trade and a big hint in this game is that you need to think literally and out of the box in order to continue.

One thing that is a let down is the control. Instead of clicking where you want Treepwood to go, you need to hold the left mouse button and you start to move. Awn, that’s a let down. Also, bad TellTale Games! Not making the ability to drag & drop items to combine them? Making a separate option for that. Tsktsk.

Is it going to take me towards new colorful places? I hope so. The gameplay is actually a long chain of manipulating items to fool or trick people. And yes, I find this a fun way to be a pirate. As unbelievable it may sound, you play as a pirate. Which I still have trouble believing that our main character is a mighty pirate.

The world of Monkey Island is well made. Graphically the game is colorful and inviting. But the islands, well, they could  use a bit more variation. The two parts I played now have both a jungle part. Come on! That’s recycling. That could have been avoided.

I’m extremely thankful that you can save everywhere you want. It also gives a short summary of what the story is currently about. For in case you took a break and want to replay the game.

The voice acting is good. Sometimes it feels a bit out of place here and there but most of the times, it works. I would personally have said some lines stronger or else. Maybe I have still the amazing voice acting from Corpse Party haunting my judgement now. 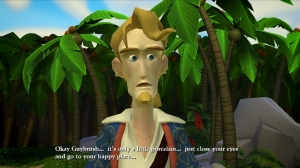 I expect this game to rock me off my socks. For now, this game has successfully drawn me in to it’s world. If I’ll let me go, we shall see about that. It might actually, but that’s the way how I play adventure games.

The music and sound has been great until now. Nothing to remark at the moment.

The animation is actually where I love the game the most for now. The detail that went in the art is great. The camera work in the swordfighting scenes is amazing enough to display the hard work the designers have put in this game.

Now, I would give this game surely a 7 out of 10 points. I’m going to finish this article here and I’m going to play this game further. To further judge this game. Maybe it goes up in points and maybe it goes down. We will see. Alright, thanks for reading. But before you leave, what’s your favorite Monkey Island game or moment? Discuss it in the comments.