So, today I want to take a look at an Android game called Space Max. The developer asked me to give my honest opinion on this game, so here we go. This game is developed by CrySoft Development and published by TinyGames. This game is available on Android and iOS devices. Because I don’t own an iPhone, I have played this game on my phone and my tablet. In this article, you will find my thoughts about this game. For those who don’t know how a game quicky works, I list what I like and dislike about the game and give my final opinion in the end. Feel free to leave a comment with your opinion on the game and/or the content of this article.

The tutorial for this game explains how this game works perfectly. It teaches the mechanics in a heartbeat.

While there are microtransactions, the first upgrades aren’t too crazy to buy. I have played various Android games where you get directly into a paywall, and this game doesn’t have that.

While this game has ads, they aren’t placed in annoying places. Also, they are used in a way how I think ads should be used. When you die, you sometimes get the chance of watching an ad to continue for free. This is a great idea!

The art for this game looks pretty cute. This game is adorable in my opinion. In that extend, the interface is designed in a great way. I have nothing to comment on that, besides that, it’s good of course.

This game doesn’t take itself too seriously, and it shows. The fact that you have to fart your way up and the crazy costumes you can unlock. It makes this game humorous to a certain extent.

Something I really like in this endless jumper is the fact that when you can go down for a little while. This is great to pick up bananas or bolts you just missed. In most other endless jumpers, this means instant death. 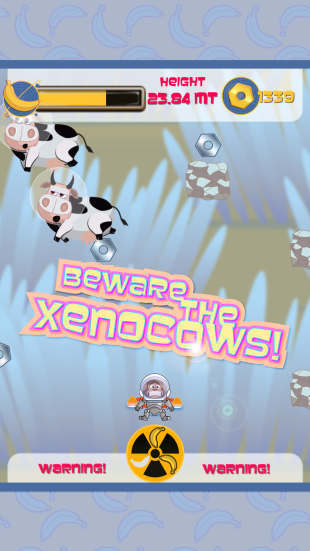 The controls can be annoying sometimes. While I understand how they work, you have to tap in the middle to go up, left to go right and right to go left. But, I think these two things would improve the game:

The game seems to hang sometimes in the menus and during gameplay. Often when I press a button to go back to the game after I bought an upgrade, the game hangs for 4-5 seconds before it goes back to the game. A little waiting animation would be great.

I think that the blocks directly at the start of the game are overkill. It feels like this is an obstacle meant for in later parts of the game. I would honestly remove them or place them higher up.

Something I wish the game had was a pause button. I played this game at breaks and when my break was over or when I had to pick up a call, I had to either quit the game or let myself die so that I don’t loose any progress.

The idea of this game is pretty interesting. At the surface, this game looks like an interesting game. But, as soon as you start playing it for while, the flaws start to show. The fart sound effect, the lack of proper controls, the game that sometimes hangs and the lack of a pause button can be a deal breaker for some people.

I honestly think that with a bit of polish, this game would be so much better. But how the game stands now, at the time of writing this article, this game is mediocre and lacks any punch to make a difference in the sea of endless jumpers that exist on the Android Play market.

Like I said, the game has a lot of potentials, but the flaws drag the game down. I’m sure that a few patches to this game can fix the issues I mentioned. Since this game does some interesting things to change up the usual endless jumper gameplay.