A few days ago, I wrote an article about a few of my favorite pieces of music in games. In that article, I talked about Forager. A game that recently got ported to the Nintendo Switch. Because the game looked quite interesting to me, I decided to give it a try and now that I have almost finished the game, I decided that it’s high time that I write an article about it. So, in this game quicky, you will find my opinions on the game and feel free to leave a comment in the comment section with your opinion on the content of this article and/or the game itself. A little side note, this review is written when the original version came out on Switch, it’s possible that things from this review can become irrelevant when new content comes out. 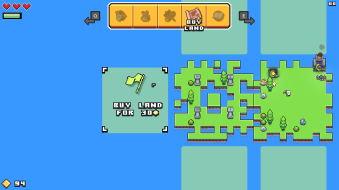 In this game, you play as a sort of nameless somebody that’s stranded on an island. Your goal is to expand the islands and survive. Now, there are a lot of game mechanics and there is a lot of crafting that will need to be done. The pacing of the game is something special. Depending on your playstyle and what you unlock, the game can go quickly or slowly.

The gameplay is quite unique. You start off on one lonely island. I was unsure at first what I needed to do. I was able to mine away from the resources on the island and after a while they randomly respawned. So, where a flower spawned first, a tree was now standing. I always got small bits of experience. When I leveled up, I was able to unlock new skills and buildings. These skills and buildings allowed to me gather even more types of resources and sometimes even more efficiently.

It didn’t take long before I had a ton of farms and factories setup that helped me in automating certain parts of the crafting process. Now, it would be lovely if they expanded a bit more on this process in future updates, like for example, a certain furnace always smelting a certain ore when it got below a certain point.

Besides crafting and grinding for resources, you also have enemies to worry about. Depending on the strength of your weapons and gear, these enemies can range from major treats or pushovers. I found it extremely enjoyable to improve my gear and then to take revenge on some annoying enemies by defeating them in one swipe of my sword.

On top of that, there are various dungeons, quests, and secrets to find throughout the game. Almost every island has something to do or to discover it. Some islands have even more than one thing. So, it’s a great idea to try out different things. If you watch closely to each island and try out things, you might discover some secret treasures and upgrades.

Now, if you talk about the presentation you can’t forget about the music and sound effects. These are excellent as well. The soundtrack of this game is a joy to listen too. I’m even considering adding the soundtrack to my playlist for when I’m writing or just relaxing. The soundtrack is in general quite relaxing but can be quite tense when it needs to be.

The controls of this game are quite responsive and easy to get the hang of. It didn’t take long for me to get used to the controls and do some advanced moves. The inventory management is a bit basic, but more on that later.

So, you have to purchase land, find secrets, unlock achievements and so much more. Whenever you finish a quest line or finish an achievement, you get special costumes that give you special abilities. These special abilities can range from taking less damage or certain enemies ignoring you. And some of these costumes are great easter eggs or references to other series. One thing to know is that once you unlock the effect of a costume, it’s always active. Even when you are not wearing it, it’s active.

Certain building mechanics are quite underdeveloped. When I wanted to place another oil pumping station, I had an extremely difficult time removing all the wood I had placed in the ocean. Also, I was unable to remove any land tiles that were blocking the pumping station.

The vaults are quite handy and aid you in stocking up resources. The issue I have with the vaults is that you are unable to choose where which item goes when your inventory overflows. At the end of my playthrough, I had several vaults and I didn’t know which item was where. It was always a find expedition when I needed to find one item or check if there weren’t item stacks that could be combined.

In an extension of that, the inventory management is too basic. You can’t move items in your inventory, you can’t change the order of the items in the hot bar. Also, when I was catching things with bottles, the hot bar sometimes switched to the caught item and I accidentally released the fairy.

The randomness and luck-based drops nearing the end can get extremely frustrating. There are two artifacts that I still have to get to complete the museum but the random drop rates of the remaining treasures are so low that after 5 hours of trying, I was unable to get even one of those drops.

There are some minor game-breaking bugs in the game. For example, there are some puzzles where the required items don’t always spawn. These bugs are fixed in the Steam version of the game, but I still experience them on the Nintendo Switch. The one that affected me is the bug with the mushroom puzzle on the rainbow island.

When you bought all the islands and crafted almost every upgrade, the game gets a bit boring. Not only is one of the final upgrades quite repetitive and slow to get, but there is also nothing to do after you bought all the islands. Now, this might change in the future, since additional content is being developed. Recently a new content pack has been released for the Steam version.

In most cases, the frame rate is quite stable. But, whenever you enter or exit a building or when there is a lot happening on screen… The framerate can drop drastically. For example, I noticed a lot of frame drops whenever I had some special buffs applied to me and I was digging all over the place. Speaking of the frame rate, there is one dungeon where you have to guide a beam towards certain obstacles to open the doors. How the longer the beam was, the worse the framerate got. 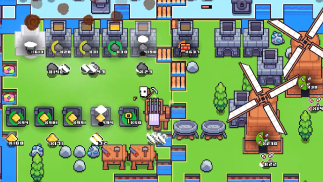 This game is quite a lot of fun, I enjoyed myself with this game quite a lot. But, the game can be a bit rough around the edges. There are some parts of the game that are still a bit underdeveloped and could some expanding.

The tricky thing about reviewing this game is that there are a few major updates planned and I have no idea what they will change or add to the game. I don’t even know if I have to restart or if I’m able to continue on the same save file when the updates come out. While some of them already got released on Steam, I don’t know if and when they come to the Nintendo Switch. 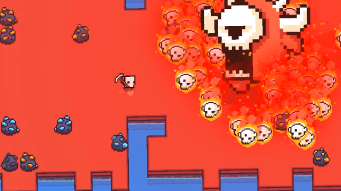 Yet, I still recommend this game to people who enjoy games like Terraria, Zelda or Minecraft. This game is a lot of fun and quite addictive as well. When I started playing this game, I had a very hard time putting the game down and playing other games. I’m very excited to see what the next updates will bring and which improvements it will bring to the game. Since if they polish the mechanics that I talked about in the negatives section of this game, the game can become even more enjoyable.

And with that said, I have said everything I wanted to say about this game. Thank you so much for reading this article and I hope you enjoyed right it as much as I enjoyed writing it. I hope to be able to welcome you in a future article but until then, have a great rest of your day and take care.