Hi, NotThatAlice here. NekoJonez asked me to review this game and I gladly agreed. Unfortunately, due to bad mental health, I put off reviewing this game until the last moment… Today I’ll be talking about a visual novel game called Senator: Scarlet Scarf. For this review, the developers provided me with a review code. As requested by the developer, you will be able to read my 100% honest opinion in this article. As usual, just leave a comment with your opinion on the game and/or the content of the article in the section down below.

The story of this game is based upon the legend of the Plague Maiden, a Norse mythological creature. A woman can become a plague maiden when she didn’t get a proper burial after she was murdered on her wedding day. Now, this legend is also used in German-speaking regions when the bubonic plague was happening.

In this game, you explore the world that has fallen twice and has an unclear future. You dive right into the mystery of a dying city with the fate of the Senator in your hands. Are you able to stop the calamity before it’s too late? Because this is a big story-based game, I’ll keep spoilers to a minimum in this review.

Now, if you are a fan of text-heavy games, you will absolutely love this game. Personally, I prefer action-packed games more but I believe that everyone has its own favorite game style. One of the great things about this game is that you can use your imagination, you don’t have to do what the game tells you to.

One thing you need to play this game is patience, it takes a while before you can decide something in the game. This also means that the game can have more than one end so it has some replay value to find out what the other decisions have as an outcome.

The game sometimes uses unknown wordings, that something to get used to. It has some kind of codex but not every word is explained. On the other hand, they are talking about a plague that is killing tons of people, that is a real thing from the middle ages. I also recognized the crow mask as a mask that was used in the middle ages by doctors in times of the plague. (I totally didn’t learn this from watching Beauty and the Beast, Disney-fan talking :p )

A little side note, something that NekoJonez didn’t like was the fact that some text was extremely close together. This can be seen in the codex. He said that sometimes an enter or two could have helped.

The text settings in the game are quite simple. You can choose to remove the text from the screen so you can see the full picture, you can change the text shading,… I would’ve made the text a little bigger though, it kinda made my head hurt a little.

Even though the game is read-through, you can enable voice assistance. This means you can still read the text but it is also read to you. One thing I would maybe change to this feature is that the text is only read to you when everything is on the screen and not while the text is written. This means you have to wait a while before you hear what is being written. It is also all in the same voice, which means you have to concentrate on who’s talking. If only the text and dialogues were color-coded, that would help quite a lot. 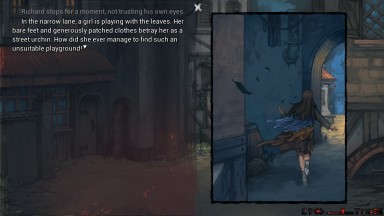 I really liked the visuals of the game, even though there isn’t a lot of animation. The style of the game is like it is painted on your screen, with paint strokes and darker colors. This makes the game a little extra special since it isn’t just an average animated game.
The background music gave me chills. The music is kinda monotonous but at the same time, it gave me the feeling that something was about to happen… The music also kinda resembled that of the Zero Escape series, which made it even scarier to me.

While playing through the game for the review, it really made me want to play on and on. The beginning may be a little slow but it you keep going until Syl tells her story you might be as restless to advance as me. This makes me admire the writer of the story a lot. I have read a lot of books, but if a book started slow, it makes me stop reading it. This game doesn’t have that problem at all.

One thing I accidentally did while first starting the game has put the game in Russian. I kinda was impatient and just pressed the first thing I saw. Maybe it’s easier if the language settings on the screen instead of only lighting them up if you move your cursor over them. I had to look up how Russian was written in Russian to find out where I had to click next. Now I kinda think it’s funny that it happened though.

Something I think that could have been improved was how the demo was handled. The demo of this game is a stand-alone package. But here is the thing, it’s a bit unclear that the demo is a prequel to the story. I think it would have worked better if the demo was implemented into the full game as a sort of the first chapter. Maybe as a sort optional chapter for those who already played the demo. What I thought when NekoJonez started playing the game at his place was that the demo actually looked like the beginning of the actual game. I don’t know if that was intentional or not.

I think that the price of 8,19 euros for the game is a good price. If the game only had 1 ending it would be a bit much but the game can be played several times, as I said earlier. There is some replay value in this game.

If you play the game, always remember to save your progress. The game doesn’t autosave, and when you exit, it doesn’t give you a prompt to save. This means all unsaved progress will be lost. Also, I found it a bit annoying that you can’t name your saves. The name of the save is simply the date from when you made the save. So, if I wanted to go back to a certain point, I had to remember which save file it was.

The settings of the game are quite simple, you can choose between windowed and borderless mode, you can change the volume of the music and sound and, which I thought was a nice extra, you can change the mouse cursor in the game. There is also an option where you can easily listen to the whole soundtrack that the game has. Besides that, you can also choose to darken the text that isn’t part of the current paragraph or on which side of the screen the text will appear on. I could nitpick that the arrow buttons weren’t the best symbol for this since it almost gives you the impression you can move the text window to your heart content… to the middle for example.

And that’s everything I wanted to say about this game for now. When I have fully finished the game, I might write a more in-depth review of this game. I want to thank the developers for the opportunity of reviewing this game. I also want to thank you, the readers for reading this article. Feel free to let me know if you enjoyed reading this review as much as I enjoyed writing it. I hope to be able to welcome you in another article but until then have a great rest of your day.