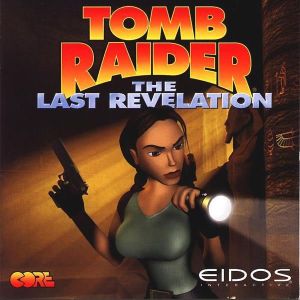 The year is 1999 – 2000. Young NekoJonez was 8 years old. I only had a gameboy and quite an old pc. It could run old dos games and such just fine but as soon as I started to play games that were released after 2001, my computer freaked out. So, I grew up with handhelds. Although, there is one game I played as a child while not being 100% allowed. I played Tomb Raider 5. A game I picked up at a local toy store for a few bucks. I heard quite a lot of rumors of an Indiana Jones style game on the PlayStation, and that they were able to take a peek when the big brother or parent played the game. So, curious Jonez is curious and when I played TR 5, I was kinda disappointed. The controls really threw me off. Years later, I get myself the Tomb Raider bundle after having so fond memories of Legend, Anniversary, Underworld and it’s latest reboot. So, the last few weeks I gave TR 4 a try… Did it change my opinion when I was a child? Let’s take a look at the game. As usual, feel free to leave a comment with your opinion on the content of this article and/or the game.

Editoral note: The reason I linked to Tomb Raiders.net their informative entry of this game instead of my usual habit to link to WikiPedia or the official site is because I used their images for this article. They deserve the credit.

I choose this game since it’s one that I wasn’t able to play as a kid. When I bought two TR games, they actually messed up and put TR III on the disc where IV should be. And they put TR IV on the one which needed TR III. I still own that copy, so I might show it in a video.

TR III and TR V worked just fine. Until I tried to run TR IV. The game crashed as soon as it wanted to boot. And because I didn’t knew a lot about computers back then, I wasn’t able to fix it. Then Steam came around and offered me this bundle of all the Tomb Raider games. So, I bought it. I was surprised when I saw that my 64-bit beast of a gaming machine was able to run the game just fine.

The game opens like how I remember the other old school Tomb Raider games open. With an introduction screen with ‘new’, ‘load’,’options’ and ‘exit’. In the background you have an animation of a few levels you will encounter in the game. I adore these title screens since they give the game that much more charm.

Yet, I wasn’t pleased with the first level. Not at all. With little to no backstory, you are dropped into the tomb and you have a guide with you that explained all mechanics of the game to you. The voice acting is a bit off. There are sometimes small moments of silence between lines and the young Lara has barely any emotion put into it. (At least, that’s my opinion).

I wanted to explore the level, yet, out of the dialogue of the tutorial I felt that it wasn’t really allowed. What really made me annoyed is the fact that you don’t have a weapon in this level while there are enemies. 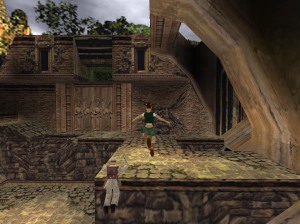 Truth to be told, it actually let me get used to the controls. The controls that threw me off and stopped me from playing the Tomb Raider games in the past. So, this brings me to one annoying thing in this game. The menu to configure your controls. While it works fine, it doesn’t recognize azerty keyboard lay-outs. It isn’t the biggest issue though, it’s that you can barely “read” the menu. It’s quite hard to actually make out what key does what unless you take out a ruler and put it on the screen. It’s a nitpick I know, but it’s rather annoying. … Oh, I actually lied. There is an even bigger issue. You can bind one key to more then one action.

The controls are responsive yet they are outdated. Playing old games like this really proves to me how hard wired my mind is in using the controls in a game now-a-days. Yet, after you get used to it, you will be able to pull off some nice moves. Yet, there are two major issues I have with the controls… and that is how picky the game can be of your location to be able to pick up an item or pull a lever. The second issue I have is how awkward the controls are for swinging on a rope. At least to me. Maybe I’m too used to the control scheme Indiana Jones and the Infernal Machine used.

I think it would be unfair to judge the game on graphics and animation, in a way. They are quite outdated and on modern systems they then to glitch out a bit. Yet, I don’t think it’s an issue. The presentation brings an amazing atmosphere. It really feels you are exploring a tomb.

After the tutorial level, there is little to no explanation on what to do. Thankfully, after you solved a puzzle, a small cutscene plays showing you the general direction you need to go in.

It actually blows my mind how well designed this game is. You can explore around and find hidden areas and I rarely got the feeling of being lost. While I was thinking about what I wanted to talk about in this article, I wanted to mention the lack of an ingame map… Actually, it isn’t an issue. Since it helps to build the feeling that you are exploring a location nobody has visited for quite some time.

So, let’s talk about the music. This is actually difficult for me since I feel that the soundtrack of later games are better then the old soundtracks. Before you write angry comments trying to explain to me what is wrong with my opinion here, let me explain. What I mean is that the more action packed soundtrack fits the atmosphere more then the more calm, bit creepy soundtrack of the old school games.

Actually, I like the soundtrack of this game. From what I have heard, it adds to the creepy atmosphere you would get when you are really exploring tombs. It fits more to the style of the old school Tomb Raider games.

In any case, I think I’m going to wrap up this article for now. I know that I talked a bit too much about the controls in this game. If you didn’t get the clue, I’m quite enjoying this game. If I finish it, I’ll surely write a review article about it. I wanted to focus in this article more on the issues I have now-a-days with the controls and why they actually made me stop playing Tomb Raider as a kid. I think I should return on that topic.

Thanks for reading and I hope you enjoyed reading this article. I wish you an amazing day and I hope to meet you another time. Take care, NekoJonez.