You thought it was over after Corpse Party? Well, think again, Corpse Party Book Of Shadows shows the tale extremely different. With the opening of this game, you get the impression that this game is a sequel but once you actually start with the game, it’s clearly far from a sequel. Corpse Party was an excellent visual novel horror adventure game for the PSP, I truly enjoyed playing it and directly got myself the sequel. And I have been playing it often. The game is extremely different from the original and in this article I’ll talk if those changes are for the good or for the bad. Be warned, this article is about my first impressions of the game. I have only played a major part of the first chapter. I’m also finishing up the bonus chapters in the original, since you can unlock content with it in this game. But enough talking in this introduction, let’s dive right into Corpse Party – Book Of Shadows.

In the original game I would go far if I told you that the characters weren’t developed. While it’s true that you don’t get a lot of information about the characters themselves, the actions of the characters easily shape a picture of them. But this game takes it a step further. In the first part I played of this game, I have already gasped several times.

In this game, things that you could suspect in the original return. What’s Seiko’s deal with Naomi’s ass anyways? Well, you get the answer in this game.

This game seems to have a deeper story. You can always check back on the previous conversations by the touch of a button. And here, it’s getting in the right direction. You can scroll up and down and get to the top and bottom rather easily.

A major improvement is the ability to save anywhere you want and there are even more then just one save file! The save system is greatly improved since the original.

One thing I didn’t like is that you have to watch the introduction movie if you start the game for the first time. I honestly admit that I forgot to save the game after the first time I played it and I couldn’t skip the long introduction. Before you can get to some gameplay you will have to go through huge parts of text. I’m sure that this first part took me more then a hour to get through. Man, I wish I had a speed-up button.

The original is a joke 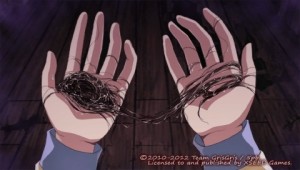 Yes, the original is almost like a joke to this game. The visuals are kicked up a big notch. You now run in a sort of 3D world. The graphics are extremely nice made for this game. You can see the cursed school from all it’s 3D glory. And this get a thumbs up from me.

The voice acting is extremely well done too. I have had the annoying part where you tapped the confirm button way to fast that the voices couldn’t follow. Yes, the original had that slight problem. This game doesn’t have that issue.

Also, the more the cure gets to you, the more blurry your screen gets. And this is such a nice addition. I actually don’t understand the mechanics of that just yet, but I’m sure that’s just a matter of time.

The controls aren’t explained but they are straight forward non-the-less. You can search each room easily and when you can get information about something, you cursor will turn blue. Also, the parts that are timed, don’t interrupt the gameplay at all. But those didn’t interrupt in the original game either.

Time to turn up the amazing dial. 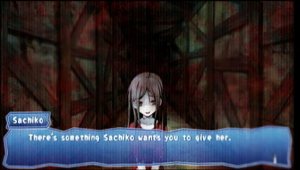 I gave the original game already a high score, but this game seems to run past it with ease. And I have only played the first chapter. The music is tense, and memorable.

With hints to the first game everywhere, in the music and story, this game is an improvement of the first game. I can’t repeat that enough. With the save files you can now see when and what time you made that save file.

There is one step back though, with the name tags list, they were better organised in the original. There it was per chapter and you had a little picture for each corpse. Now, both aren’t there. Oh well, that’s a minor nitpick anyways.

I realize that my thoughts in this article are all over the place but what I forgot to mention with the story is that thoughts are now no longer simply between brackets. Oh no, they are now in a different colored box. That’s great for newcomers to the genre. What’s also better is that there are more visual pictures to look at while the story is unfolding. There is less use of a black screen with a box in this game.

Have I mentioned that this game is slowly growing towards my list of most influential games in my life of all time? Only my favorites get  on that list and this game is a big blast to play. I don’t mind the long waiting times between gameplay since the story is extremely well written. The voice acting draws you in even more. The sound design is one of the better ones I have heard in a game for a while.

Music that I want to listen daily too, memorable characters, great design and a challenge for every gamer. This game is getting a high score from me already, but is the game going to keep it this game throughout the whole game. That you will read in the review, when I am done with the game. But for now, NekoJonez signing out.