This isn’t a review, but a rant about something in this game. I played the Pokémon Mystery Dungeon series a lot. I played all of them. I was so excited that I even got a 3DS in the hope that there would be a new entry in the series on the 3DS. And finally, we got one. But, now there is a major issue here. I’ll probably address this again in my review but I want to get this out of my system now. On my forum, there were a lot of discussions too, so I’ll add those complaints into this rant. 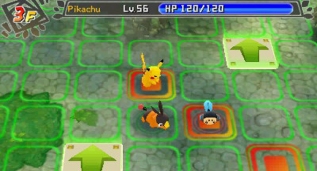 The dungeons are way better now. You have parts outside and where you need to solve puzzles. It gives a unique twist to the game.

Now you can also farm berries. Yes, it takes some time though but it’s a neat addition. The Pokémon Paradise you are building is an amazing fun concept. It really gives the feeling of progression. But wait a minute, this is becoming more like a review instead of a rant. Whoops, my bad. Let’s go ranting.

First of all, a big let down is that you can only do 1 mission at a time. Yes, no multiple missions for you. You need to give the request to the Pokémon to open the “Request Gate” and after you are finished, the day ends. I can agree this makes the game a bit more realistic but it really gets annoying because of one thing. The game taunts you with a list of 5 pages long missions. Each page has about 4 missions. And when you finish a mission, the list doesn’t shrink. Oh no, one mission gets added. Oh, the joy of “infinity.”

I often find myself trying to save by sleeping. But guess what, you can save now everywhere except in the dungeons. But they removed the ability to save while sleeping. For people who got used to the original formula, don’t change up the way how you save, please. I forgot to save twice thanks to this. But this is a minor annoyance.

Nintendo, why did you got rid of the hunger system? It made the game more challenging and now without the hunger system, you can get through dungeons as if it was a breeze. Agreed, the hunger didn’t really bother you in dungeons that much but it gave something to think about when you forgot to buy food.

DLC? Seriously now? 1,5€ per extra dungeon. No thanks, I pass. This is a game where DLC is not really welcome. In my opinion, DLC should be for PC’s & consoles. Not handhelds. Let’s face it, how many credit cards do you have? Not much. But what annoys the crap out of me is the fact that the DLC is present as soon as you buy the game. DLC should come later as a sort of expansion. If this came later like when the game is nearly off store shelves, then I wouldn’t react this way.

This isn’t really a cut but a big annoyance. Which kinds of drugs have the Pokémon taken? They run extremely fast, nearly uncontrollable. And their dialogue boxes are so slow. And here is the best part. You can’t edit the speed of the dialogue boxes AND the running speed is already annoying on the normal speed. May the Lord help those who take fast speed.

I’m going to leave it here for this rant. Thanks for reading and I hope you enjoyed. I’ll write a review of this game when I find the time and when I’m finished with this game. But for now, I’ll get playing.

I feel odd when playing this game. so many nice new things, yet those cuts really bother my game experience. Maybe I’m judging this game too early. It will be very interesting. See you guys at the next post!