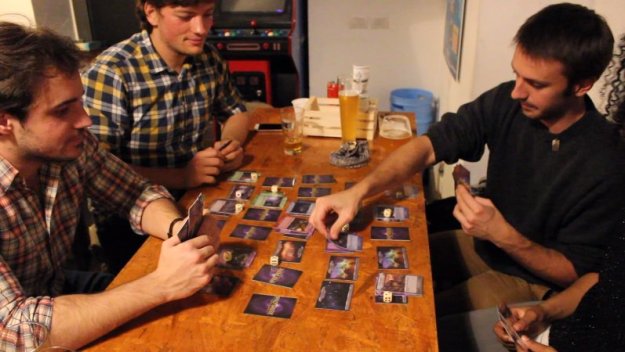 Since the inception of the genre, when Richard Garfield created Magic: the Gathering in 1993, a large number of trading card games have been created, each with its own themes and mechanics. However, if we look at the TCG landscape today, few of them remain standing. So many of them have just disappeared without a trace, but why? Can a new TCG be successful today?

What is nature of TCG?

Trading card games, also known as collectible card games, by their nature require players to buy booster packs and trade cards with their friends in order to build decks and start playing. This can be quite an investment: booster packs cost money and you need a sizeable collection of cards to start trading and building decks from, which requires quite an investment. The randomness within booster packs, along with the different rarities of cards makes the collection process quite costly, long and difficult. This usually means that an average TCG player can’t realistically get into more than one or two trading card games at the same time. This, as you can expect, means that when a new TCG is released, the target audience is already well invested into other games, and is hesitant to pay that much more money on a brand-new game which still has a small following. The success of a TCG is directly related to the size of its player base. Even smaller TCGs require a stable player base in order to stay in business. If a TCG player doesn’t have any friends who play the same game, he or she is more likely to abandon it for a more popular TCG. This leads to the bigger TCGs staying healthy and gaining more players, while the smaller ones disappear.

By now, the paper TCG market is dominated by only three games: Magic: the Gathering, Pokèmon, and Yu-Gi-Oh. Smaller TCGs still exist, but they are usually based on pre-existing franchises and piggy-back off their success. However, TCGs aren’t just limited to paper. With the advent of the internet, many online TCGs have started appearing and getting more popular despite the problems their paper cousins faced. Why is that? For starters, it’s much easier to find people online to play the game with. In fact, the game itself will find an opponent for you to play against. This means that as long as there is even a small, but stable, amount of people playing an online TCG, the game will still be able to stay alive and organize tournaments. Another advantage online TCGs have over paper TCGs is that they can be free to play, meaning that anybody can try out the game, without hesitation and fear of having to spend a lot of money. Not only that, but online TCGs have many more ways of distributing their cards to their players than just by selling booster packs, decks, or single cards. They can implement systems that allow players to unlock cards just by playing the game, or by accomplishing certain goals in the game. Games like Hearthstone and Hex have had great success with these strategies, and upcoming games like Multiverse: Cosmic Conquest will do so as well.

What about paper TCG’s?

But what about physical cards? Is there no hope for new paper TCGs? What about the players who enjoy TCGs not only for the gameplay but also the interaction with people, the fun times they have with their friends at home or in the game store? Well, while the TCG model is unlikely to work for new titles, this doesn’t mean that new games played with customizable decks are doomed to fail. Fantasy Flight Games coined the term LCG, which stands for Living Card Game. An LCG is a game in which, much like in a TCG, players build their own deck out of the vast collection available. The difference comes in the way the game is sold. LCGs are sold like board games, in that the entire game (or expansion) is sold in a single box, like a board game. There is no element of chance when buying an LCG, you know exactly what will be in the box before you buy it. This approach, while it defeats Richard Garfield’s idea of a game that’s “bigger than the box”, gives certainty to new players. It tells them exactly how much money they will need to invest in a game to be able to enjoy it to the fullest. Games like Lord of the Rings LCG, Android: Netrunner, the Star Wars card game and much more are sold in this manner. The LCG model makes these games much friendlier towards board game players, which also broadens the traditional TCG player base. Multiverse: Cosmic Conquest promises to be released as an LCG if its Kickstarter campaign reaches a certain stretch-goal. So, while you may not enjoy the feeling of cracking a booster pack of a future TCG, you can still do so online, or play it like a board game with your friends.

Leandro Tokarevski was born on September 26th, 1993. At the age of 6, he started learning the violin. He was always interested in games and drawing, and in 2004, at the age of 11, he moved to St. Petersburg, Russia, where he started to attend an evening art school, as well as continued his music studies in an evening music school. In 2009 he graduated the music school and since then he’s continued to play in various bands and ensembles both on the violin and on the keyboard. In 2010 he graduated art school as well as high school, and entered the St. Petersburg Academy of arts, where he studied architecture. This is where he started to get involved in game design and development. In 2014 he started working on the card game Multiverse: Cosmic Conquest and in April of 2016 he self-published his first full game: Rebels Unite, for which he was both the game designer and artist. In July of 2016 he graduated the Academy of arts, moved back to Rome and started working full-time on game development. Currently he’s working as a pixel artist for the 2D RPG Towards the Pantheon, while continuing to develop Multiverse: Cosmic Conquest. For more information about Multiverse: Cosmic Conquest, please visit a website: https://tokartsmedia.com/