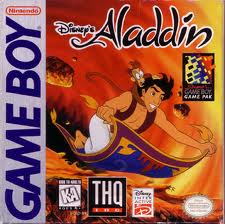 I have a cousin who I went to each Saturday. One day he lend me DuckTales on the gameboy, which was a great blast. But I do remember one game that he lend too with it. A game so bad, I’m not even going to finish it before I write a review of it. This game on the SNES isn’t that bad, but the gameboy version is terrible. I got this game from a friend, when she didn’t want to keep her gameboy games anymore. I was so happy that I got new free games. But when I saw this cartrigde, I wish I could cry right there on the playground. Man, bad memories of this game. I’m even putting on a sad face while writing this review. Sadly enough, this game is playing next to me on my SuperGameboy and my SNES. It’s already clear that I’ll rip this game a new one, but how bad is it actually? Let’s dive right into Aladdin, without a magic carpet to save our ass.

Some games might have a few flaws. Or just have some things not polish. But this game is a joke. Let’s start analysing this insult of Virgin Interactive by looking at the options.

The difficulty levels are not what you expect from a normal game. Easy is practice and hard is difficult. Yes, I kid you not, the screen says literally “difficult”. Signs for a great game. Also they feel the need to be special and or grammatically correct. Somewhat. The options for the music and sound are displayed as follows:

Why? These “is” and “are” aren’t doing the game any good. It’s silly and just lines of code lost for the actual game. And they could have used it. Oh yeah, a minor annoyance is that you can’t scroll back that the difficulty menu. But that’s nitpicky me.

So, let’s move on with this review by pressing the B button to get out of the options menu. Wait, it’s one of those games. You need to go to “exit” to go back to the main screen. Oh yeah, “exit” instead of “return”. Whoopsiedasy.

In the name of all the holy and good cartrigdes, be happy that I played this joke for you so that I can warn you about this game. First of all, this adventure and platform game suffers from one major flaw that is also quite visible from the menu. There isn’t a save or load option. This is the kind of game that could have benefited from this feature. Like the first Super Mario Land on the gameboy, this is one of the games you have to play in one sitting. And that isn’t good at all for a handheld game. No, since usually you play these kind of games on the bus or at the doctor’s office. So, you wish you could save.

The controls are weird at best. But at the start of the game, you don’t have any guide or nothing to explain you how this game works. Let me give you one hint. Press the select button at the start of the first level so you don’t waste any apples. Yup, they start you with an attack that is limited. And without giving you a slight hint that you can press select to switch weapons, the game gets annoying really soon.

While I do realize that I ranted about game tutorials more holding your hands these days, this game should have had at least an easier first part. The very first part of this game is filled with all sorts of things. You barely get time to get used to the game mechanics or the controls. You are expected to play this one with already knowing every sort of enemy or hazard.

I just noticed this too, while writing this review, I have to pause the game and then write a bit. And the pause screen actually kindly reminds you that the game is paused with displaying a “PAUSED!” message at the bottom left of your screen. How lovely that they think we are stupid people. Just like the enemy AI in this game. I could stand in visible range of an enemy and it kept just standing there. How lovely. Also, some enemies seem to have a very special attack pattern. The one the animators gave them. And your goal is to be faster then the animation.

All the apples of the nopes.

For a Gameboy game, the flaws don’t stop there. The music is the next victim of my critic-ing. And it’s terrible. The menu music is true to the

movie. But the music in game is just a loop of a 1-2 minutes melody and it gets annoying and repetitive extremely quick. And there is no way to go in game to the option menu to put it off. They forgot to program that in I suppose.

The first camel you pass in the game, which can be used as a mini-trampoline, actually spits out knives from it’s mouth. This happens after you see an enemy cheat by walking over hot coals. Which is actually a black puddle on your screen. That brings us to the graphics. They are bland. Somethings even don’t represent that they are supposed to be. The apples look like bombs. And who dies of apples, except from chocking on them, anyways?

Also, the attacking of enemies is flawed. Their melee attack reaches further then yours. Which means that you need to use your valuable apples to take no damage. And believe me, you are going to need that health since it’s so rare to find a health pick up. In addition to that, you don’t get explained what the power ups do. One of the first power ups I came across is one that wipes out all enemies on screen. And guess what, there was only one enemy on screen. ONE, for NOPE’s sake, ONE!

Oh, and what’s up with the jumping? You can’t attack when you are in the air. In addition to that, when you fall from a platform, you are locked vertically. So, if you see a vase dropping down on you, it’s damage you can’t avoid. Oh yeah, cheap game. Very cheap. But lucky me, the damage doesn’t get taken since the animation was still playing of Aladdin getting up after the fall. And this ended after the vase actually hit me. Oh joy.

Also, what did I say from the AI before? Further in the first level, I was able to get an enemy in attack mode without even the ability to hit me. Wait, why isn’t it coming closer to me then? Oh yeah, movie game. That explains a lot. So I destroyed this enemy with my rock apples. Which brings me to another complaint. There is no clear indication which weapon you have selected. You just need to guess or to press the attack button to know that.

The decent animations of the characters are ruined by the white outline around them. Which makes those very clear, but not the places where you can and can’t jump on. Since this game isn’t so linear, this is another issue.

And then my copy decided to freeze. Which it often does. So, end of this review! On to the conclusion.

+ Follows the movie story quite well.

+ It’s exists for reviewers to rip apart when they need to review a bad game.

– Lacking save and load feature.

– Major flaws in the controls.

– Too steep of a learning curve.

– Nothing of the game gets explained.

– Difficult even on easy.

When you are a Gameboy collector, get this game. But let it gather dust. As a hobby gameboy gamer, don’t even spend money on this title. You’ll regret it for sure. There aren’t many games I don’t finish for a review but this is one of them. I had trouble finding good points to defend this game.

This was a promising game though, but the lack of so many things and screwed up basics make this game a shouting fest for adventure and platform gamers. I forgot to mention a few things in my review like the sound and the enemy always being able to hit you first, but it’s clear that this game has more flaw then Swish cheese has holes.

And if you would excuse me, I need to play better games now to finish up other reviews of actually good games. Thanks for reading and feel free to leave in the comments what your experience is with the game.