Under which smooth stone are you sleeping if you never heard about Minecraft or Lego? This game exploded on the indie game scene, and it’s the big hit of today. With over 10 million copies sold on PC and mobile devices, many positive reviews, this game has to be good. I play it myself nearly daily and went to MineCon last year. But wait a minute, am I actually playing a good game or a messy torturing? Let’s look at the blocky world of Minecraft and let’s check how good the game actually is.

The graphics suck? No, they look retro! 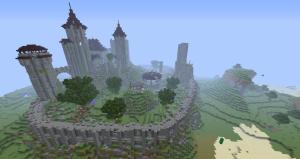 Many rant video’s how to say that Minecraft sucks will tell you that the graphics suck. Or that it looks bad. The defenders say that the game looks retro. And while the game looks indeed retro, it gives more the impression of Lego blocks in pixel form to me.

Honestly, this game can’t be reviewed in a graphic style. Yes, you can comment on the vanilla graphical looks, but there are so many texture packs that can change the look of the game that it’s impossible to review the graphic side of the game. And I’m not counting the mods to make the game look like “HD” and all the shaders.

If I needed to rate the vanilla graphics, I would praise it. Since all recent games actually go for a realistic look, this game stands out with its blocky and pixelated graphics. The vanilla look has never really bored me and I actually barely play with a texture pack. Saves me the trouble of updating it whenever the game updates. Also, I am a retro gamer, so I feel right at home in this blocky world.

I don’t get why people bash so much on the graphics of Minecraft. They give me the impression that whenever something doesn’t have proper fingers, the game looks ugly. The people that mostly hate Minecraft are the people who like shooter games. It’s silly how their reviews are always negative. They aren’t really objective, and they rip the game apart. As the Minecraft addicts praise the game. Anyway, I’m repeating myself here. Let’s continue. 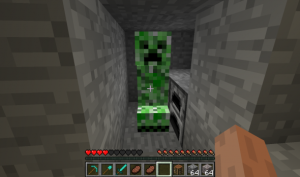 Another big complaint is that the game’s storyline, wait, what story? Well, the thing is that in Minecraft you make the story yourself. The game is a sandbox game and has virtually no limitations. There isn’t even a goal in Minecraft, as there is never a real goal in simulation and sandbox games.

The developers can give the player a goal. Like in the Sims, you need to keep your Sims happy. In Minecraft, the main goal is Survival. If you play in the Survival Mode that is. You also have the creative mode where you get all the blocks handed to you.

In the survival mode, you could mine ores, make a farm, build a home, fight mobs… You can do a lot. Exploring the randomly generated caves is in my eyes a lot of fun. There are actually many things to do in Minecraft, too much to talk about in one review.

There are people on the internet who always make new games within Minecraft itself. Minecraft isn’t going to get boring quick. You have PVP games, Survival games, shooting games, CTF… With Minecraft, you can always make a goal or find a goal to spend countless hours within the game.

The combat is actually a limited part of the game. You can fight mobs, where I think the skeletons are at 1.5 a bit too strong for my liking, and you can fight players. Your only weapons are a sword and a bow. You can enchant your weapons with various enchants, but different weapons in vanilla would be welcome. Thankfully there are mods who add more weapons when you need it.

On the subject of mobs, there are way too few enemies to fight. You have your explosive dude, slender man copy, dead archer, spider, and zombie. Let’s not forget the mutated pigs, the silverfish, blazes and ghasts. Those are all enemies in Minecraft. You have two bosses in Minecraft, one is the Ender Dragon, the other is the Wither. Both give you a challenge if you don’t have good enchanted equipment. But with the enchanted equipment the battles can be a breeze. The Ender Dragon gives you loads of XP when killed and the Wither gives you a Wither Star to create beacons.

So much to talk about 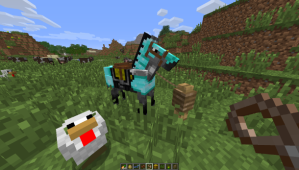 It’s obvious that this review isn’t complete. And it never will be. The game keeps updating and changing. Which is a lovely thing? New blocks are added, new mobs, new ways to play the game and bug fixes. The game can be very buggy and very complex.

I have been praising Minecraft for the whole review now, let’s get to the negative side of Minecraft.

The AI of passive mobs is sometimes a joke. The villagers are a great example. They give so many YouTube LP’ers so many troubles that some even rage when they need to work with it. Trying to get a passive animal to follow you is annoying and sometimes very irritating. If you go too many blocks down or when you are in a crowded area, the animal can lose you and just do what it wants.

Minecraft asks a lot from your computer. It’s coded in Java but on computers, with a bad graphics card the game can lag and often have frame drops. It’s playable but with tiny render distance, the game gets a lot less fun quickly.

Online, there are way too many hackers. It destroys the fun for people. Grievers, raiders and various other trolls are on servers and sometimes bullying people. It breaks the game and really makes some people sad. Myself included.

Installing mods was difficult, but with custom launchers, it’s a breeze. I’m not going to go in-depth about mods since otherwise, we will be here for six other reviews.

My final point in this game is about the music. It’s amazing. But it barely and rarely plays. It’s a bit sad if only an option existed where you can get the music playing non-stop.

+ Has so many things to can you make come back multiple times.

– Herobrine is still in the game.

– The AI of passive mobs needs to improve.

– The game can sometimes be very silent.

Like I already said, I can get talking about this game for ages. I try to keep my reviews around this length and I know that I have skipped over a lot of the game elements. The mods that expand or change the game, the various online servers, online mini-games, the big community… Or even the big yearly event MineCon. I went to MineCon in Paris last year, videos are on my YouTube channel.

Let me know in the comments what you guys think about this review and Minecraft. I enjoy it, very much. But it’s not perfect. Thanks for the updates Mojang and the great game.

12 thoughts on “Review: Minecraft (PC) ~ Virtual Lego’s with a twist.”